Link to this page

Milkmaid, Iona
Order a Hand-Painted Reproduction of this Painting

Francis Campbell Boileau Cadell was born in Edinburgh and educated at the Edinburgh Academy. At the age of sixteen, on the advice of the painter Arthur Melville, Cadell went to study in Paris at the Academie Julian. His exposure to the French artists of the time was to have a profound and long-lasting effect on his art. He met Samuel Peploe in Paris and become friends with the more senior artist whose career and art had a distinct influence over him.

Cadell's first one man show was held in Edinburgh in 1908, and until 1914, he was based in the city, apart from a brief period in Munich and a short, but memorable stay in Venice. Cadell made his first visit to the Western Isle of Iona in 1912 and found it an emotive place, not least because of the light and colour of the beaches and skies. It attracted many other artists, including Peploe, Fergusson, John MacLauchlin Milne and William Glass. In Scotland Cadell had little direct contact with the progressive ideas that were emanating from abroad. As a result he chose as his subject matter articles and environments that were close at hand - bottles, fans, fashionable Edinburgh New Town house interiors and glamorous women which he painted in a loose, impressionistic manner, the colours strong and fresh. 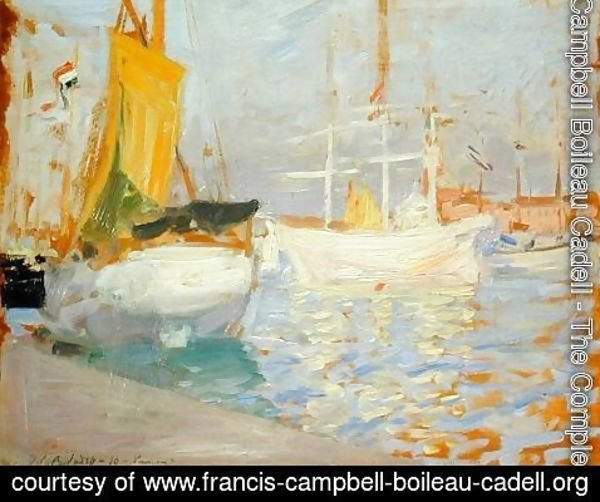 His trip to Venice not only provided the ideal setting for his natural colourist talent, but by 1911 enthused him enough to make arrangements for an annual exhibition of like minded artists of a higher standard than those at established venues, The Society of Eight, which although based in the Scottish capital, transcended the traditional Glasgow/Edinburgh divide as it comprised artists from both cities. Among the group were Patrick Adam, David Alison and John Lavery. SJ Peploe was later elected a member. A dramatic change can be discerned in Cadell's work after the First World War, during which he served in the 9th Argyll, 9th Royal Scots and the Sutherland Highlanders. His style became much tighter and his work up until his death in 1937 aged just 54, showed a tendency towards stark, clear cut still life and interior scenes, with an emphasis on the creation of precise, almost geometric patterns.

His palette, although still light in tone, tended towards primary colours, and his brushwork lost its pre-war vigour. Cadell's canvases began to show a greater debt to the tenets of still life painting laid down by French Impressionist artist Paul Cezanne in his structured approach to the application of colour. Like Cezanne, Cadell spent much time experimenting with still life arrangements as they allowed him to mobilise form, line and colour in their purity, without the intrusion of a narrative content. At his first London exhibition in 1923, which he shared with the Peploe and Hunter, the critics commented on the 'new solidity' of his painting. In the summer months Cadell would stay on the island of Iona in the Western Isles. Toward the end of his life he found his paintings increasingly difficult to sell, mainly due to the economic conditions of the 1930s. (From EXPlOREart)

Report an error on this page